U.S. Railroads Are Booming, Thanks to Bakken Oil 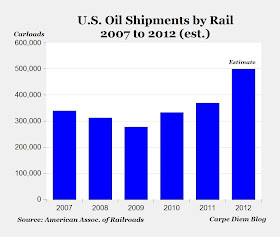 CNBC reporter Frank Byrt travelled to the Bakken region of North Dakota and wrote this report:


Among the biggest beneficiaries of the demand for transport of crude oil out of North Dakota’s Bakken shale region are the owners of the two main rail links to the region, Canadian Pacific Railway and Burlington Northern Santa Fe, which is owned by Warren Buffett’s Berkshire Hathaway.


The companies are exploiting the lack of pipeline capacity needed to ship the region’s rapidly growing production of crude to refineries thousands of miles away, and that demand is serving to more than offset expected weakness from their shipment of agricultural products due to the drought and lower coal shipments as utilities shift to burning the cheaper natural gas.

Oil production from the 200,000-square-mile Bakken basin, which extends into Montana and southern Canada, is skyrocketing, thanks in part to the use of hydraulic fracturing, or hydro-fracking, a process where a mixture of water, sand and chemicals is blasted deep underground to release oil and natural gas trapped within shale rock.

My recent visit to the Bakken underscored the importance of rail traffic to the region, as this projected long-term boom, still in its infancy, is in dire need of infrastructure to support it.

That means material for the build-out of roads, housing, pipelines, and oil-storage facilities has to be shipped in, in addition to the pipes, machinery, chemicals and sand used in the hydro-fracking drilling process creating high demand for inbound rail traffic, while oil is being shipped out over the same rail network.

MP: The chart above shows annual rail car shipments of oil for the years 2007 to 2011 according to rail traffic reports from the American Association of Railroads, and an estimate for 2012 shipments based on data through Week 34 of this year. The number of carloads  transporting oil this year will likely be at least 35% ahead of last year.  Rail shipments of oil year to date this year are 41% ahead of last year, and shipments for Week 34 (the week ending August 25) were 56% above the same week last year.

This is another example of how shale prosperity is spreading down the supply chain for the many industries that support oil and gas drilling, including railroads, fracking sand, drilling equipment, housing, construction, etc.
Mark J. Perry at 9:32 PM